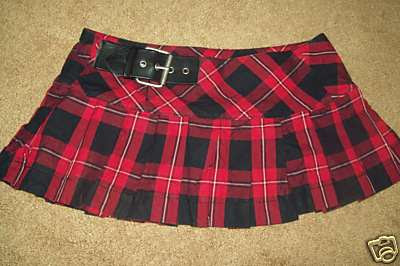 I nearly buy a red tartans mini skirt last week but because hubby was with me I was being pulled away quickly as he hates it when I wear such thing. Sound stranged, huh? But according to him I have to be wearing a sensible clothes this day since I am already a mother to two. Oooouch! Its like he is telling me that mini skirts are for young people only. Am I too old for such style? Ooooh well, I should just sneak out later to buy one, I guess. I think its cool and everyone deserve to wear it. What do you guys have to say? Speak it up!

Anyhow, here are some cool and hip clubwear tartans. Isn't it saucy and hot? I fancy it a lot, don't you? 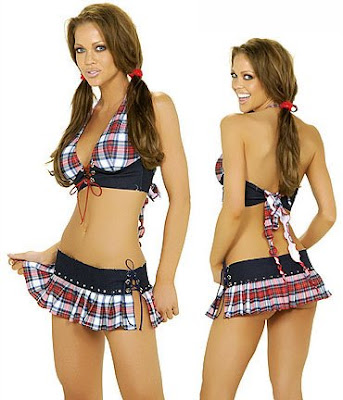 Mike Riley said…
If the skirt is, shall we say, appropriate to your figure, why not?

Popular posts from this blog

July 20, 2007
Obviously, a fashion lover and a beauty enthusiast who simply wants to share her inner piece of thoughts and passion via blogging.  This virtual crib wholly serves as her stress therapy - where she linger over to her ultimate shopping wishes and wants, obsessively.  Other than that, it's a place where she can be totally loose and be a woman in all aspect.  Where else could be a better place other than here in this simple niche -  browsing, exploring, discovering the latest glam and glitz, that will bring out the best of her, branded or not! For this very reason why this blog is created; to share her passion, her style and her closet!
More so, if you wish to explore a little further, you may find many other exciting and interesting topics. For this blog is not only talk about great deals online, bargain hunts and beauty steals but also an updates of the coming season trends,  catwalks, products reviews, shopping tips and more.  So, stay tune!!

This blog is a personal blog written and edited by me. For questions about this blog, please contact Haze at ccheesley@yahoo.com.

This blog accepts any forms of cash advertising, sponsorship, paid insertions or other forms of compensation. For more information just contact me and I'll get back to you as soon as I can :)
2 comments
Read more

July 20, 2007
Have you ever heard of the name Calvin Klein? Well, if
you have, you should know he is a famous fashion designer that has been designing for many years. He has a clothing line, and also distributes cologne and many different clothes. Calvin Klein is one of the fashion's biggest names and brands.

Then: Born in the Bronx in 1942, award-winning fashion icon and marketing pioneer Calvin Klein honed his style at New York’s Fashion Institute of Technology, before going on to revolutionize the designer denim and underwear businesses with his overtly sexy ad campaigns.

I love Versace, too.
Versace is a cutting-edge fashion designer of luxury goods, fragrances, accessories and lifestyle for men and women.